"It wasn't until I was teamed up with Rick Rodgers that my longtime dream of writing my first cookbook truly took shape. His dedication to the project, to getting to know both me and my recipes on a personal level, and to ensuring that SHARE was a true reflection of myself and my style of cooking, was a testament to why he is one of the best and most beloved cookbook writers in the business."

“For more than a dozen years at Bon Appétit magazine, Rick was one of our most frequent—and trusted—contributors. His recipes were detailed and precise, invaluable tools for our audience of millions of home cooks."

"Rick Rodgers dreams up delicious ideas, cooks them with finesse, and writes the recipes with clarity and precision. You can add to his list of honed and reliable skills his editing, food styling, and just about anything else related to cookbooks. Rick is a complete pro." 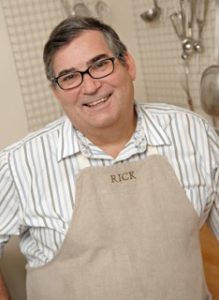 Growing up in the San Francisco Bay Area, Rick’s consciousness was raised by the region’s great ethnic restaurants and local farms. He began in the food business during high school, and after graduating in Theater from San Francisco State University, Rick moved to New York, where he was instantly immersed into the restaurant and catering world.

His catering firm, Cuisine Américaine, broke new ground when, as a young American chef, he created many events for the Services Culturels of the French Embassy’s offices in New York City. It was there that he initially fed the magazine editors, publisher, and food and beverage executives who would commission his first books and recipe development jobs. Through his work as personal chef to the late Jerry Stiller and Anne Meara, he met and catered for many of New York’s show business elite. These relationships paved the way for his career helping celebrities and chefs tell their own stories.

A number of Rick’s projects have landed on The New York Times Best Seller list or gone on to win Beard, IACP, and Gourmand Awards and nominations. Click the tab above to see the details in his publishing history.

Rick’s combination of down-to- earth humor and unique teaching skills helped make him the winner of the prestigious Bon Appétit Food and Entertaining Award for Outstanding Cooking Teacher. He is now concentrating his cooking talents on his own website, coffeeandcake.org, where he teaches how to make exquisite desserts from cafés and coffeehouses around the world.

He has also appeared as brand ambassador for top food, beverage, and housewares companies, including Kingsford Charcoal, Grand Marnier, Four Roses Bourbon, and Driscoll’s Berries. He has been on Today, CBS Morning Show, Good Morning America, and Food Network Challenge, and other shows in every large local media market. His recipes can be found online on Epicurious, as well as a full-length online cooking class on Craftsy.com. You can also find Rick on Facebook, Instagram, and Twitter.